Healthcare Legislation Is Not About Healthcare

They knew that whenever power is centrally concentrated, the individual is made to suffer by gradually losing rights and liberties to an oppressive, power-hungry few.

Once our Republic gave way to Social Democracy, our representatives couldn’t sell away our liberties fast enough for a multitude of reasons (certainly including placating various interest groups for their reelection votes).

This was done while most of us were asleep at the wheel. But now that we’re at a full sprint toward ruler’s law being propagated by both political parties, the population has begun to wake up and notice that their house is on fire!

It is imperative that we take our eyes off the specifics of the proposed healthcare legislation (i.e. death panels, etc.) and focus on the authority granted to our federal representatives by the people (see the enumerated powers given to congress found in Article 1 Section 8 of the constitution).  From Pelosi to Cardin, Congress has continued to repeat the talking point of being granted “broad powers” related to the General Welfare, Commerce, and Necessary and Proper clauses.

As I and others did at the August Cardin Town Hall, we must continue to press this issue of authority or lack thereof, because authority is only ours to give – not the government’s to take!  We the People did not grant the Federal government the authority in our Constitution to involve itself in these domestic issues.

Unless we unify around properly granted authority, unalienable rights, and self-evident truths – we’ll continue a losing back-and-forth game of arguing the issues where the ball keeps getting pushed down the field a few more inches toward the Nanny State end zone.

As for results from what occurred at the Cardin Town Hall event, it simply afforded me the opportunity to reach a nationwide audience with this message of authority (Click here for the short video clip).  Will you join me and others to keep the message of authority in the national conversation? 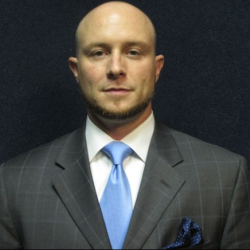 Joshua Lyons
Joshua is the co-host of The Forgotten Men radio show Saturdays at 12noon ET, on AM930 WFMD  and online at ForgottenMen.com.